The dual aspect of the Father is by no means unknown to religious speculation.

This is proved by the allegory of the monoceros, or unicorn, who symbolizes Yahweh’s angry moodiness.

Like this irritable beast, he reduced the world to chaos and could only be moved to love in the lap of a pure virgin.

Luther was familiar with a deus absconditus. Murder, sudden death, war, sickness, crime, and every kind of abomination fall in with the unity of God.

If God reveals his nature and takes on definite form as a man, then the opposites in him must fly apart: here good, there evil.

So it was that the opposites latent in the Deity flew apart when the Son was begotten and manifested themselves in the struggle between Christ and the devil, with the Persian Ormuzd-Ahriman antithesis, perhaps, as the underlying model.

The world of the Son is the world of moral discord, without which human consciousness could hardly have progressed so far as it has towards mental and spiritual differentiation.

That we are not unreservedly enthusiastic about this progress is shown by the fits of doubt to which our modern consciousness is subject ~Carl Jung, CW 11, Para 259 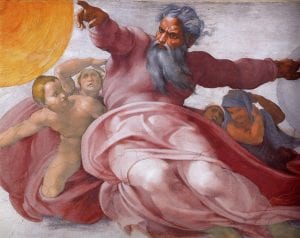